In Wireless Sensor Networks (WSNs), a large number of sensor nodes are autonomous, distributed and self-organized, they are connecting and cooperating with each other through multi-hop wireless communication. In order to reduce the data redundancy and the communication load, in-network data aggregation is usually applied to merge the messages during the routing process. How to efficiently transport the designated sensor readings from source nodes to sink nodes by using data aggregation functions is the most important issue concerned in this thesis. A theoretical energy consumption model is created to validate the effect of data aggregation on reducing the energy dissipation, and the value ranges of key parameters are further analyzed. Four common optimization objectives in WSNs are defined through the customized functions, all of them can be trade-off through a multi-objective optimization framework. From the spatial perspective, the explorations of the optimal routing structure for different scenarios are defined as steiner tree problem and multi-commodity network design problem respectively. From the temporal perspective, the theoretical optimal waiting intervals of unslotted aggregation timer on each intermediate node are discussed. 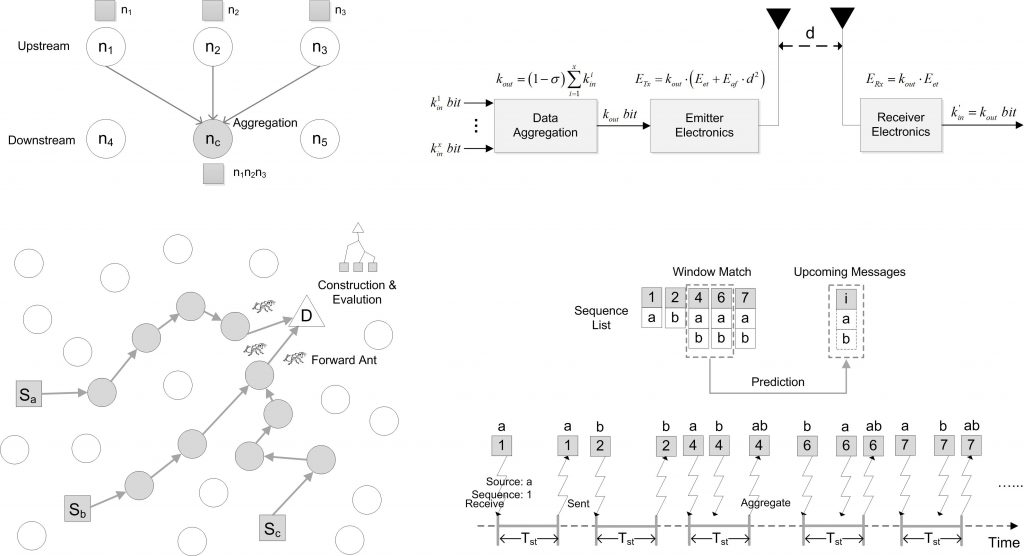 For the scenarios with single sink node, the many-to-one version of aggregation approach is developed. Ant Colony Optimization (ACO) is naturally embedded into the routing process. Forward ants record the routing history, which is the basis of routing structure construction on the sink node. The convergence rate of exploring optimal structure is accelerated by Genetic Algorithm (GA). Backward ants traverse the current optimal tree to deposit pheromone. The routing structure can gradually converge to a sub-optimal tree, whose links have high probability to be selected as the paths by upcoming ants. The time point of transmission and aggregation is controlled by distributed aggregation timers, their waiting interval can be dynamically adjusted according to the prediction of future messages, and the sliding windows are the basis of prediction. The convergence property of ACO routing is further validated through a theoretical model. In the meantime, the benefits of adaptive timing policy are also proved through the qualitative analysis.

For the scenarios with multiple sink nodes, the many-to-many version of data aggregation approach is proposed. The routing scheme is working in a fully distributed manner. Backward ants are removed and the routing structures are not constructed on any sink node. Forward ants carry the pheromone information, and the neighbors’ information can be updated by both overhearing the neighbors’ transmissions and receiving the forward ants. Thanks to the broadcast nature of wireless communication, multicast transmissions are used to simultaneously exchange information with multiple targets. Each aggregation timer can combine not only the messages coming from different source nodes but also the messages moving towards different sink nodes. The theoretical performance differences between two versions of our approach are qualitatively compared.

In order to quantitatively testify the efficiency of our approach, we implement a periodical data collection system on the OMNeT++ simulator. MiXiM provides the layered modeling framework to realize different components of this system. In the simulations, the best parameter settings are analyzed to maximize the performance. Comparison tests select some existing aggregation approaches as the comparatives approaches, the results verify the advantages of our approach. Besides, two versions of our approach are tested in the same scenarios, their performances on different optimization objectives are carefully observed.